Celebrity endorsements of ICOs or any other product for that matter always gives a much needed boost to the sales of that product. For a generation of people obsessed with popular culture, seeing one’s role models and icons promote a product makes people want to get their hands on it real soon. But what happens when the product they endorse turns out to be a sham?

Something similar happened with Centra Tech Cryptocurrency ICO which was promoted by DJ Khaled, the popular singer and music producer and Floyd Mayweather, the well known boxer.

Back in September 2017, both these celebrities had taken to Twitter to promote the Centra Tech Cryptocurrency. Khaled was all praise for the Centra project calling it ‘the utlimate winner’. 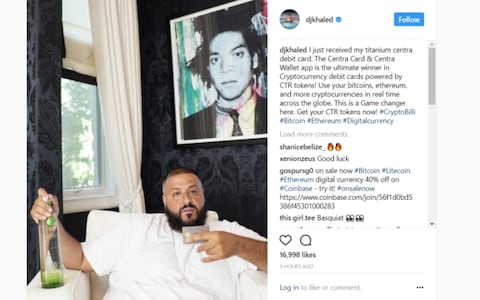 These glowing endorsements from such well known figures helped Centra Tech ICO accumulate a revenue of more than $32 million during the crowdsale.

Unfortunately, these two are now being sued by victims of a cryptocurreny scam. They are facing a class action lawsuit which accuses them of legitimizing this scam of a digital currency by endorsing it.

So what’s the scam? Earlier in the year, the founders of Centra Tech were charged with wire fraud and securities fraud by the United States Securities and Exchange Commission (SEC). Their claims of partnership with Visa and MasterCard were apparently false.

Having made these fake claims, they went on to sell a debit card with which it was apparently possible to convert Centra tokens (CTR) in fiat or spend the CTR tokens. The three founders – Robert Farkas, Raymond Trapani, and Sohrab Sharma – face up to five years in prisonsince the SEC has made it clear that no such partnership exists.

Now we stand to see what fate has in store for these two celebrities who have been accused. This brings us to the larger debate, should celebrities be held accountable for the products they promote or should the common people use better discretion? We are not taking sides, but you are welcome to.