John McAfee, the eccentric cybersecurity pioneer who’s running for the Oval Office in the 2020 US presidential elections, has recently teased on social media from somewhere in the Bahamas that he is all set to launch a new crypto debit card that can be used “anywhere.”

According to the cybersecurity expert’s tweets, the Visa-branded bitcoin card features his face over an American flag background with broken chains within the stripes in the front, and a QR code usable for BTC deposits in the back. The card’s lower left corner says “Freedom Lover,” and on the bottom it features McAfee’s “Get your soul back” slogan. 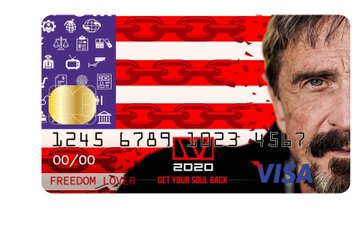 According to McAfee, only the first 12,000 cards will have this design, while the other will be “plain.” The eccentric cybersecurity pioneer noted the card will be usable “anywhere,” and all users have to do is top it up with bitcoin, presumably something that can be done using the QR code in the back of the card.

McAfee has, however, been under fire recently for seemingly making false claims regarding the identity of Bitcoin creator Satoshi Nakamoto. After claiming he knew who was behind the pseudonym and claiming to be about to reveal it, McAfee has so far only claimed to have given hints about Nakamoto’s true identity. He said,

The US extradition request to the Bahamas is imminent. I met with Mario Gray, my extradition lawyer, and it is now clear (read his letter below) that releasing the identity of Satoshi at this time could influence the trial and risk my extradition. I cannot risk that. I’ll wait.

Despite the controversy, McAfee is a well-known bitcoin bull, who predicted the flagship cryptocurrency will hit $1 million by 2020. Despite last year’s bear market that saw BTC drop from a near $20,000 all-time high to a $3,200 low, he is still maintaining his $1 million prediction.

Last year, McAfee launched a campaign against a leading cryptocurrency exchange, HitBTC, that was motivated by the platform’s withdrawal fees on a token he invested in. The campaign led to a lawsuit that when asked about, McAfee claimed not to be allowed to discuss the case.