The Craig Wright drama continues and just when you thought it couldn’t get worse, it just did. The self-proclaimed Bitcoin (BTC) creator has provided false court documents to prove a trust deed with his plaintiffs.

The  trial lawyer Stephen Palley tweeted a picture of the documents on Twitter on July 3, as seen below. 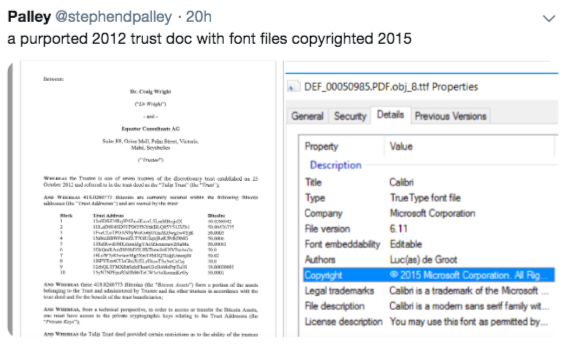 According to Palley, font files used in the document are from 2015, whereas Wright claims that the documents are from 2012. There are several discrepancies in his statement, that the trial lawyer has pointed out in court, and it seems that Wright is fighting a losing battle at this point.

According to Wright, he presented deed of trust document is from Oct. 23, 2012, however the metadata of the file has been presented in court and it clearly shows that the document was created after the death of Kleiman, as Palley found.

This document was supposed to be a testament for the proof of cooperation between Wright and the late David Kleiman, whose lawyers brought this lawsuit against Wright in February 2018. The document was filed as an exhibit with the District Court for the Florida Southern District on July 3.

Wright has been accused of stealing hundreds of thousands of Bitcoin, which at press time are valued at over $5 billion. Palley also brought his unique sense of humor to the court when he said:

“I mean it makes sense that the inventor of bitcoin can time travel. Your honor.”

This case is just getting worse at this point and the industry as a whole is tired of Wright’s fake claims. People are anticipating that justice will prevail and Wright will get what he deserves.