The inevitable halvening is right around the corner, and in around two years’ time, approximately on May 27, 2020, unless wild swings in the mining hashrate change anything, the coin reward for mining new Bitcoin blocks will drop a heavy base from 12.5 BTC to 6.25 BTC. This has already got crypto enthusiasts worrying about what this will do to the price of Bitcoin.

Now, what exactly is a Bitcoin halving, or as the community calls it, halvening?

It is the fixed event where the amount of new Bitcoin created and earned by miners with each new block of transactions is cut in half. It is part of Bitcoin’s predictable, transparent monetary policy, which can be verified in the source code available on the Bitcoin Core GitHub repository. When these sort of changes in Bitcoin’s inflation rate take place; it’s known as a halving event.

Much has changed for Bitcoin, cryptocurrency and blockchain since the last Bitcoin halving on July 9, 2016, when block number 420,000 was mined, and each time it happens, it becomes quite unpredictable as to how the Bitcoin price, or the economy that has been built on it, will react.

There have only been two Bitcoin halvenings since Bitcoin’s creation in 2009. It is a fixed event and will occur after every 210,000 blocks are mined, or confirmed, by the system.

The first Bitcoin halving event took place on November 2012 and approximately 12 months after that, the Bitcoin price reached what was then an all-time high of $1,000. The 2016 halvening marked the start of last year’s bull run which peaked in December 2017 with the Bitcoin price reaching a staggering value of $19,000.

Since then it’s made a sharp descent— but the same happened after the 2012 halvening and consecutive boom, with the Bitcoin price falling as low as $200 per coin before shooting up again before the 2016 halvening. 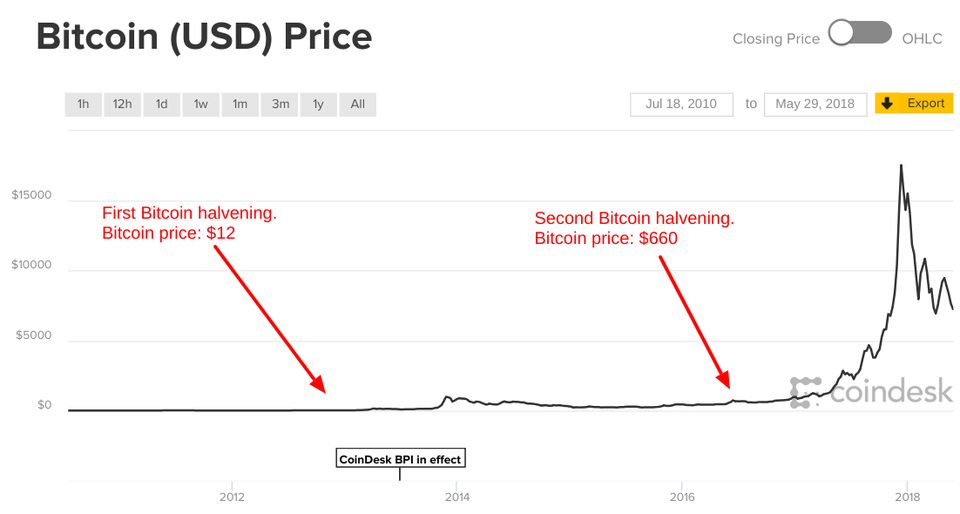 The trend has continued with a long-term spike in the BTC price after both of the first two halvening events, but the event itself never resulted in a heavy instant impact.

“Previous halvenings have shown negligible impact on Bitcoin’s price. This is because — rather like a much anticipated interest rate cut — everybody already knows it’s going to happen way in advance,” said Glen Goodman, Bitcoin analyst and author of forthcoming book The Crypto Trader.

“Historically the cut has had very little immediate impact, although the price usually rose after,” said Chris Wilmer, professor at the University of Pittsburgh and co-author of Bitcoin for the Befuddled.

“Cryptocurrency markets are often very event-driven, and as we get closer to the next halving Bitcoin’s price will receive a boost from those anticipating the forthcoming reduction in new supply,” said Garrick Hileman, head of research at Blockchain and co-founder of Mosaic. “In the months leading up to the last two halving events, we saw bitcoin’s price steadily trend upward, and then power higher following the reward halving.”